Choose a decade below to view the Initiates 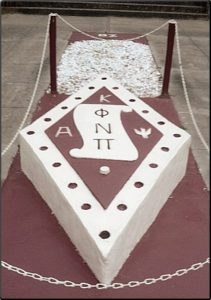 The Beta Zeta (None Greater) Chapter of Kappa Alpha Psi Fraternity Incorporated was chartered on the campus of Alabama State College on May 7, 1938.

The Chapter became known as the flagship chapter of the South, because it is the first chapter chartered in Alabama. The prestigious charter members were Lloyd Bouie, Theodore Hart, Tracy Bryant, and Ernest Gully. Henry Kelley, a graduate of the University Chicago, became the chapter’s founder and first advisor of the Flagship chapter. An instructor in Romance Languages, Kelley joins the College faculty in fall of 1936.

Among the early initiates of Beta Zeta Chapter were Edgar A. Montgomery in 1939, and Caesar Culver, Samuel Gant, and Alfonso Gordon in 1940 along with B.J. Noland, Edward K. Weaver, and Alexander W. West, Jr., and Lloyd Bouie, later founded the Montgomery Alumni Chapter in 1949. Like so many other chapter in Kappa Alpha Psi, Beta Zeta did not begin to flourish until after World War II. Among those initiated this period was Cleophus Mitchell, who was Polemarch of the Denver Alumni Chapter during the 61st Grand Chapter meeting. On the Beta Zeta roll in 1949 were Ralph D. Abernathy, Jackson Bruce, Willie F. Carr, L. Cromwell Handy, Hayward Handy, Percy King, Clemmie Loman, James Mullins, Edward Presley, Charles Presley, Archie Shaw, Charles W. Thomas, Cleophos Vann, and Percy Weatherly.

As the chapter moved into the 1950’s, its community service program taxed each member 50cents for the March of Dimes and allocated $3.00 to Vernon Z. Crawford to attend the State NAACP meeting. Prominent in the chapter were Polemarch Michell James, Moses Clark, Lemuel Taylor, Howard Creecy, Willie B. Ross, Clifford C. Bker, Benjamin Adams, L. C. Mims and Jacob Dupree. In the early 50’s, brothers paid their Grand Chapter dues of $5.oo and continued to improve the strength of the chapter. Some of the members at that were Manuel H. Pierson, Leonard L. Burke, and James Farris. Coach Authur E. Simmons served as chapter from the late 40’s into the 60’s. Ralph Bryson was assistant adviser from 1953, when he joined the faculty.

During the mid-50’s the chapter had on its roster the backbone of Alabama State championship basketball team: Hugh Martin, Frank Smith, Jimmy Dew, and William Sides. A highlight of the chapter in February 1960 was the annual observance of Founders’ Day with Past Grand Polemarch J. Jerome Peters as the speaker. The chapter also placed first in the annual March of Dimes collection competition. Prominent brothers in the chapter were Milton Ivery, Howard Robinson, Walter Black, Walter Bush, Roosevelt Harris, David B. Moore, David Kennedy, and Willie Lee Sutton.

In 1971, the members of the chapter helped establish the first chapter of Kappa Alpha Psi on a predominantly white campus in Alabama: Eta Mu at Jacksonville State (1974). On the roll at that time were Jerome F. Lee, Lebaron Pettaway, Grady A. Thompson, Bobby McKenzie, Eugene Evans, Thomas J. Sumpter, Jonny Hardwick and Lewis. The establishment of Eta Nu in 1974 at the University of South Alabama was and followed by Theta Phi in 1976 at Troy State, both was extensions of Beta Zeta.

John J. Ivery was an adviser when the Line of 38 came along in 1978. Of that group, Collis H. Ivery lll became chapter’s first Guy L. Grant award winner at the 63rd Grand Chapter in Atlanta, 1980. Others from this prominent group were Darryl R. Lowe, Billy Mayhand, Erick Wright, Charles Calloway, Bruce McDonald, and Cromwell Handy. The Line of 25 in 1979 had an accumulative GPA of 3.1, which brought a letter of commendation to the chapter from National, and the None Greater chapter have been achieving ever since. In 2007 Beta Zeta won the chapter of the year and since then was won countless step shows and awards the chapter has proven itself to be “None Greater” chapter its members has achieve on a plethora of levels. The Chapter has open doors for other chapter as well to extend the brotherhood of Kappa Alpha Psi.